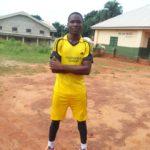 Passion and love for the game

Chiejina Evans is a right footed player who, at the tender age of 12 started playing football for a local based club in the village, albeit only making few appearances.

By the age of 15, he was already a full first team member of the club now known as Samba F. C.

He won the league trophy with the team twice and was named the best player of the season two years ago.

He plays, as a defensive midfielder, central and attacking midfield positions with a good eye for the ball.