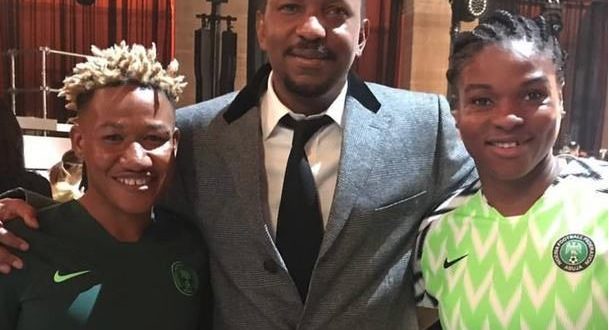 With 87 days to the FIFA Women’s World Cup in France, preparations are in top gear with teams playing friendlies, ongoing trophy tour, tickets being sold, official poster has been unveiled and on Monday, March 11 in a colorful ceremony some national team world cup uniforms including Nigeria’s designed by Nike were unveiled.

Nigeria’s women will be wearing the home and away Nike jerseys that were unveiled in 2018.

Nike showcased 14 national team collections, including the United States, Canada, Nigeria, Australia, France, and England. On hand for the unveiling were more than 25 Nike soccer athletes, including American stars Alex Morgan and Megan Rapinoe, both of whom were members of the 2015 USA squad that was crowned World Cup champion.

Meanwhile, The FIFA Women’s World Cup Trophy made its fifth stop on its 24 country tour in Rio de Janeiro, Brazil on Monday. The trophy will make a stop in Abuja, Nigeria on April 11th, 2019.

Last week, The Official Poster for the World Cup was unveiled in Paris coinciding with International Women’s Day on March 8th, 2019.