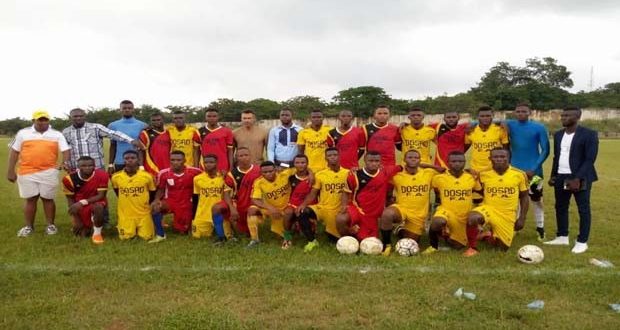 . . . Director Assures of Bumper Packages Ahead

By Uche Enem and Iyke Nwokedi

Six grassroots football players from Anambra are on their way to Europe in the coming weeks having been picked by foreign football scouts from Belgium and Romania, at the end of a 6-day programme at Neros Stadium Nanka. The programme which held July, 26-30, 2018, had over four hundred players from 22 teams taking part.

DOSAD SPORTS alongside her partners and investors, hosted and sponsored the programme in conjunction with the foreign scouts and local agents, whose scope sweeps across forty two countries. The agents were led by the scout of Standard Liege Belgium, Tomas Dossevi. Others were Chukwuma Nwankwo, the CEO, Eamax Sports International and Kingsley Bobby, the Director, Kings Football Management. Also in the team was Mr David Amanyi, another top football agent and former player whose football sojourn saw him playing for over nine Nigeria league teams and across six countries.

Speaking to the Press, the director of DOSAD said his dream of bringing a revolution in sports in Anambra and Nigeria as a whole is paying off. He said he pulled off this deal, due to the high business and investment sense of his partners and the participating clubs to do real football business the way it should be done. “I took my football advocacy and investment proposal to some friends (confidence maintained) to partner DOSAD Sports to host this international scouting programme as sponsor-investors. This entails that with the money they invest; they get an agreed percentage of the deal of any successful player picked in any football deal abroad. The partners raised the fund alongside DOSAD, the top scouts and agents were invited, and now we have good news that some players have gotten football deals abroad” DOSAD Director said.

Continuing, “the participating teams also must be commended for their business sense in agreeing to be part of the deal. They had an agreement to release all the players in their various teams for the football deal. In effect, all the over 400 players who took part ij the programme played under DOSAD-Club agreement. This implies that DOSAD takes care of the players picked and when players get a deal, both DOSAD and the player’s parent club share the incentives according to their earlier agreed percentages. I enjoin Ndi Anambra to partner DOSAD for more of these” Fr Dike said.

The Rev Fr Coach also said a bigger scouting programme is coming up in September, fully to be sponsored by DOSAD and privileged Investors who make the list early enough. They will be drawn from top leagues across the world. He called on Ndi Anambra to seize this opportunity to advance in sports.

The six picked by the team of scouts for immediate processing of documents for further football trials abroad are; Ubachibuike Elijah, Tarhie Jude, Azor Samuel, Alika Miracle, Chigozie Emmanuel and Prosper Nwachukwu. Out of these, direct offers are on table for three while the other three are being negotiated. The scouts promised to assist the players develop well so as to enjoy good and lengthy career instead of rushing them to quick deals that may not allow them develop maximally.

The remaining players in the selected list would play as a team with some beef up at the scouting progrmme in Abuja later in September.