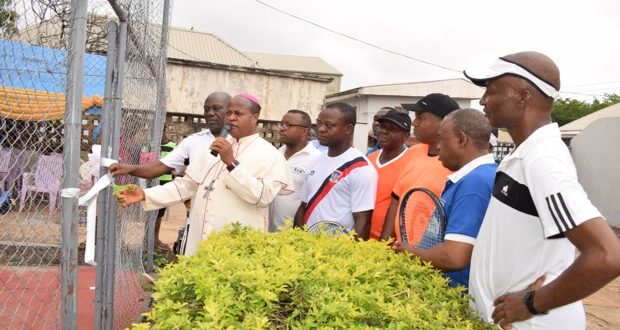 Fides gathered that the flag-off, commenced the competition that involved about 32 priests and would last for a period of two months.

Handing over the Tennis Court to the Catholic Church following its completion, the Chairman of Awka Catholic Diocesan Priests Fraternity (ACDPF), Rev. Fr. Peter-Val Uzoezie appreciated the diocesan Bishop, Most Rev. Paulinus Ezeokafor who was represented by his counter, Bishop Okpaleke for the renovation which was made possible through him. He noted that the court would enable priests in the diocese to keep body and soul together, saying that priests’ fraternity in the diocese would receive a boost through it.

Fr. Uzoezie who is the co-ordinator of the Renovation Project, called on those who don’t play Tennis to come and join others who play Tennis as it was an avenue to socialize.

In his words, ‘It is not all about playing tennis. Come and interact with fellow priests as some pastoral issues could be solved through such interaction’ he stated.

Re-opening the Tennis Court, Bishop Okpaleke thanked those whose initiative led to the transformation of the court and others who pioneered the construction of the court. He stated that the daily activities going on in the Tennis court would make priests feel better in mind and body.

Speaking to Fides, the Director of DOSAD, Rev. Fr. Obinna Dike applauded the diocesan bishop for improving the Tennis court and expressed hope that more priests would be motivated to join others who play regularly at the court. He described the tournament being organized by Fr. Muonwe as a welcome development, saying that more of such was needed.

Speaking to Fides, the Sponsor of the Tennis Tournament, Rev. Fr. Michael Muonwu said the tournament was organized in a bid to energize and mobilize priests in Awka Diocese to come together as brothers. He maintained that such competition would help to lubricate the priesthood ministry as it creates avenue for leisure among priests.
In his words, ‘You know many a times, priests don’t have time for leisure so this creates time for leisure. When they come around, they enjoy their social life not only spiritual life and pastoral life. It will help us also to ease off stress attached to various pastoral engagement and move on with life’ he noted.

He disclosed that a grand prize of N50,000 awaits the winner while the second runner-up and third place winner would receive N30,000 and N20,000 respectively.